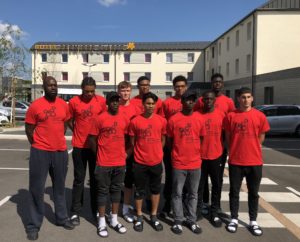 The Haringey Hawks U17 boys gathered at Haringey 6th Form to be taken by minibus to Gatwick airport for a 6am flight.

After meeting the rest of the group at the airport we caught the short flight to Geneva, which is located on the Swiss-French border with views of the Alps, which are only a short drive away.

The host club Meyrin welcomed the team and took them to lunch with Tres Cantos, the team from Madrid. The tournament was an invitational one with U17 boys and u15 girls categories. The other teams in the 6 team boys category were from Greece and Switzerland, as well as Tres Cantos. The 4 team girls category contained French, Croatian and Swiss teams. 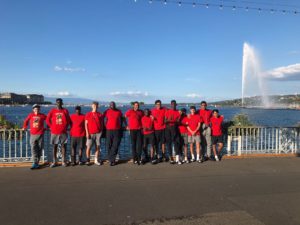 After lunch we had a welcome rest at the hotel, before some sightseeing in central Geneva. We passed the headquarters of such prestigious organisations as the UN, WHO and UNICEF and arrived on the shores of Lake Geneva, where the spectacular Jet D’Eau was the central attraction on the beautiful bay on this beautiful sunny day. The boys enjoyed the sunshine and had fun practicing their French.

A short tram ride took us to the courts where we enjoyed dinner before watching some of the first games on the Friday evening.

Saturday began with breakfast in preparation for a big day of basketball, with 3 games for the Hawks. The boys were ready and focused and came out absolutely storming in the first game against the host club Meyrin which they won 110-27.

The second game was tougher against a good quality Tres Cantos team, but the English u17 team were in great form and 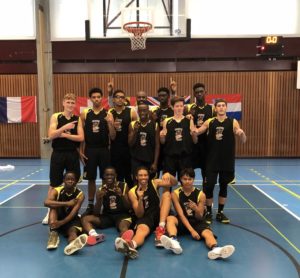 proved too strong for the Madrid team, taking the victory 88-50.

After topping their group they faced another Swiss team, Bernaux, in the semi-finals. The Haringey boys full-court press, strong rebounding and fast-breaking style allowed the them to dominate 86-36, a great way to finish the day. After dinner they stayed to watch the other semi-final, the result of which would see them meet Tres Cantos again in tomorrow’s final.

A well deserved lie-in was followed by the boys watching the Girls final between a superb Croatian team, containing 4 national team players, and a young team from Paris.

The Boys final against Tres Cantos started close, with the Madrid team being more competitive than in their previous clash, however the strength and talent of the Hawks roster saw them take a 50-31 lead at the half. Their superb play 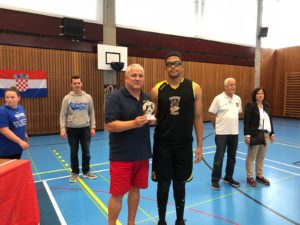 continued in the second half and they ran out convincing winners 89-48, earning themselves their first international tournament title with Franklin Agu picking up the finals MVP award.

Coach Franck Batimba and the boys picked up the winners trophy to rapturous applause from the spectators, and celebrated in style with winners photos. After saying goodbyes to their fantastic hosts and the friends they had made during the weekend, the boys enjoyed a well earned pizza before their late evening flight back to London.

This was a great first international tournament for this talented group who will be together at the Haringey Sixth Form Basketball Academy this year. Hopefully it won’t be long before they are back in Europe looking for increasingly challenging opposition to conquer – well done lads!