Posted by admin on Sep 4, 2017 in Uncategorized | No Comments

Essex Rockets Coach Josh Prentice and Coach Reece Gunn took a mixed u16/u14 team and one parent supporter to Tres Cantos in Madrid during the last week of August 2017. They set out to have a lot of fun, build some strong team foundations for the season ahead, and to win some games! 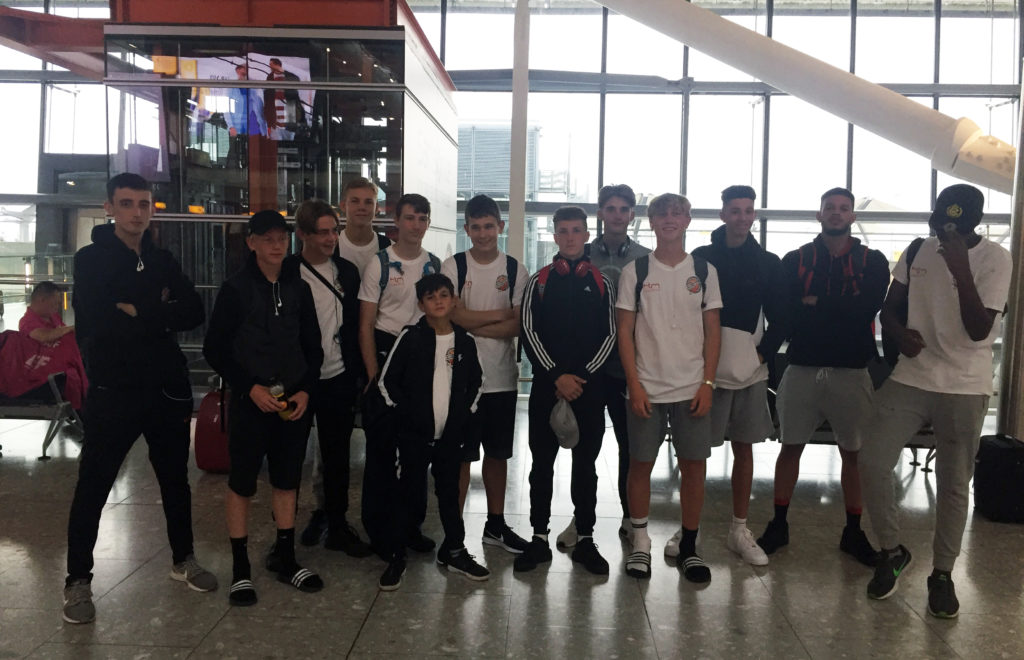 After an early departure from Heathrow we arrived in Tres Cantos to glorious sunshine. Tres Cantos is a safe and friendly town just north of Madrid, with many restaurants and street-side cafes, as well as a small shopping mall. It is a leafy town, and its tree lined boulevards provided some much needed respite from the very hot temperatures this week. A tasty lunch was followed by a walk to the courts to acclimatise and have a light shoot around, and by dinner time the boys were thoroughly enjoying themselves.

The first basketball day started with one of our foreign coaching clinics that featured a session with Elena de Alfredo, a Spanish coach who has represented Spain at every age group, has played in NCAA D1 in the USA and is shortly off to be the assistant coach at the University of Tampa. The boys worked on ball-handling drills, which is one the skills the Spanish basketball focus on from very early ages.

After the session the boys had a break to rehydrate, followed by Coach Josh taking an opportunity to get the team prepped for the evening’s game as he ran them through some of their playbook. They then headed to the local pool to unwind for the afternoon.

Game 1 was played against a predominantly younger Tres Cantos select team. One of the advantages of working with established partner clubs is that they have many teams, including multiple teams at each age group, so they can adjust the strength of teams to create quality, competitive games to suit the strength of the touring teams.

Rockets started well and took a 22-11 lead at half-time. Many of the younger Rockets had the chance to play good minutes in this game and Harvey Michaelson, Will Bose, Nathan Familusi, Ollie Sellick and Josh Agar all played well. However Tres Cantos started the second half strong and reduced the deficit to 33-27 by the end of the third. The heat and early start from the previous day began to take its toll and the the fourth quarter saw the teams draw level. Rockets showed great character and effort to keep in touch during the fourth, and the lead swapped hands multiple times in a tense and really exciting quarter which ended level, sending the game into overtime.

Overtime continued in the same way, with teams trading baskets and the lead, and as the final seconds approached with the scores level again Joe Dunbar miraculously saved the ball from going out of bounds, throwing it back to Callum Legg, who side stepped his defender and knocked down a buzzer beating 3 to win the game! A great start to the tour for Rockets.

After the excitement of the previous night the boys went to Madrid to visit the Bernabeu stadium, home to European football giants Real Madrid. They really enjoyed visiting this magnificent stadium, seeing all the trophies that this great club has won, including the record 12 European Cups and Champions Leagues. They finished the tour in the press room, taking questions on last night’s victory.

After lunch in Madrid’s city centre, some shopping at Adidas and a visit to Retiro park gave them a great flavour of Madrid, and allowed them to recharge before the next few days of basketball.

A slightly later start to the day gave the boys a chance to enjoy the great hotel breakfast buffet, followed by a basketball session taken by Cristina, one of the senior Tres Cantos coaches who put the boys through 1on1 skill development. Lots of water is very necessary in these practices and throughout the tour, as well as good eating and a considerable amount of sleep (if they can curb their excitement and get an early night, which is a tough one for some boys!). Coach Josh then put the boys through their paces looking to sharpen them up before the evening’s game, which was against a strong 2002 born team.

In the second game the Rockets started well again, but a strong 2002 Tres Cantos team fought back quickly and the game was tight throughout most of the first half, which ended 23-25. Showing great fight and a never say die attitude the Rockets kept taking the game to Tres Cantos and again the lead traded hands multiple times in the 3rd and 4th quarters. With the game tied at 44-44 late in the 4th the positive attitude and effort from the Rockets continued, but the game slipped away from them at the end, finishing 46-52 at the final buzzer. The senior boys played very well, led by a storming 26 points from Owen Young, and supported by great play from Joe Dunbar, Dan Hunter, Noah Kasakaitis and Cameron Hales. Despite the defeat Coach Prentice was delighted with the boys performance, and at the post-game dinner spirits were still positive and everyone was already looking forward to the final game the following day.

We were very privileged to have the basketball clinic on the final day delivered by Sergio Jimenez, the current assistant of Fuenlabrada Men’s team who play in the top Spanish ACB league. Sergio also previously coached Estudiantes to a U15 national championship. The Senior Fuenlabrada team features GB International Gabe Olaseni and their junior program is home to current GB U18 star Jacob Round. Everyone agreed this session was the best of the week as he worked with the boys on various skills including finishing at the basket. The boys were then treated to a bonus session with Barking Abbey and London Greenhouse Coach Rikki Broadmore, who was visiting from the UK.

After a final afternoon relaxation at the pool the boys were ready for their game against a 2002/03 Tres Cantos Select team. The game started in a similar way to the previous games with the Rockets working hard, playing great team basketball and earning themselves a 28-22 halftime lead. Tres Cantos came back at them but they continued to protect the lead until late in the 3rd when Tres Cantos put together a run to go 1 up, before ending the 3rd tied at 44-44. The game continued to be close and hard fought until an injury midway through the fourth stopped proceedings for a while. Thankfully the injured player was okay, but the momentum was lost a little and the Rockets slipped to a 57-62 defeat.

The boys thoroughly enjoyed the tour and were absolutely exhausted at the airport. They happened to bump into the Senegal Men’s team, who had some very big guys!

Rockets played some great team basketball throughout the tour, showed non-stop commitment in all the games, clinics and practices and accomplished their mission of having a lot of fun! Coach Prentice summed up the tour by saying “One of the main highlights of the trip were the coaching clinics. The coaches were very knowledgeable, and also were very accommodating of our wishes, and our kids benefited a lot from it, as did myself, and Coach Gunn. The best part of the tour was the team bonding that went on, how much closer we grew as a group, spending time with each other in a nice environment. That was the biggest thing for me.”

We thoroughly enjoyed our time with Essex Rockets and we hope the tour has helped them set themselves up for a great season.